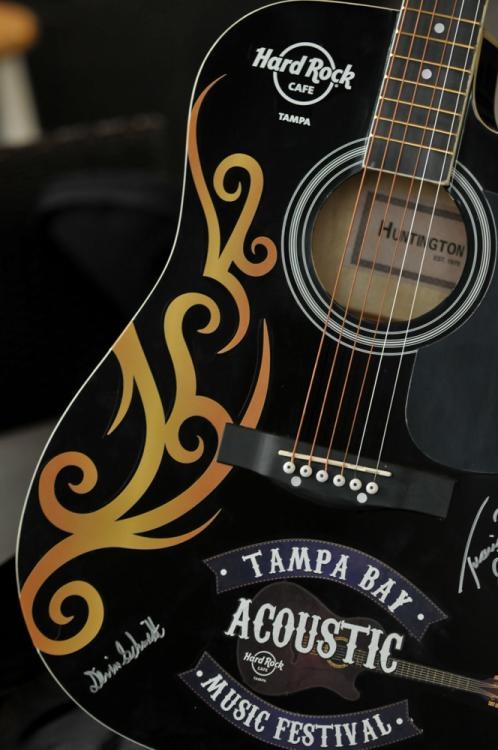 First up was Devin Schmidt. Only 18 years old, Devin started playing guitar when he was 10.  He took lessons for a few years but ended up learning on his own. Songwriting came naturally and he started singing at age 16 when he played his first gig. He is influenced by Pink Floyd, Neil Young and Led Zepplin. 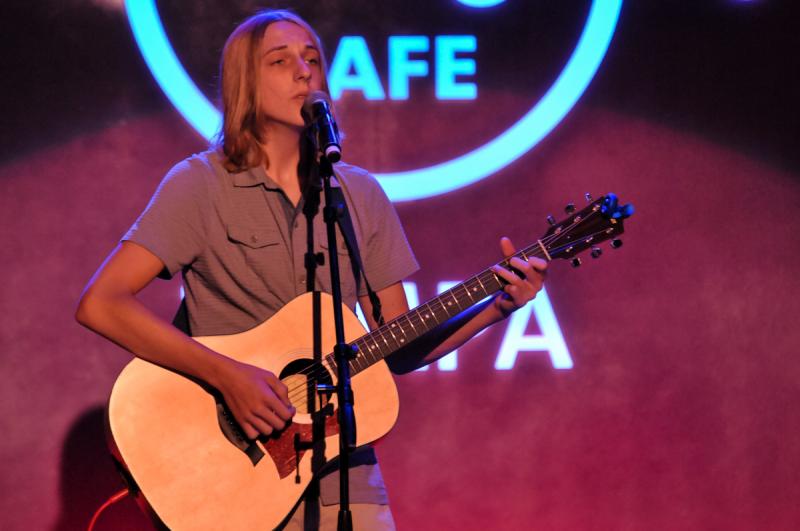 He played a set of cover and original songs including “Old Man” by Neil Young and “Little Wing” by Jimi Hendrix.  Originals included “American Scream” a song about police brutality in Ferguson and Baltimore and “Two Men In, Three Men Out” a song about a diving accident in Africa.  Devin decsribed playing the Hard Rock as “nerve-racking” but a “good feeling after”.  Devin is heading to FSU in the Fall to study Astro Physics. He hopes to continue to play music and eventualy obtain his PhD. We wish you lots of luck Devin! You have a bright future ahead of you.

Next up was Ben Pila.  Ben is an exceptionally talented classical guitarist with a Master’s from The Juilliard School and a Doctorate of Musical Arts from USC.  He has performed extensively throughout the United States and is a regular performer at the September 11th Commemoration at Ground Zero in New York City. 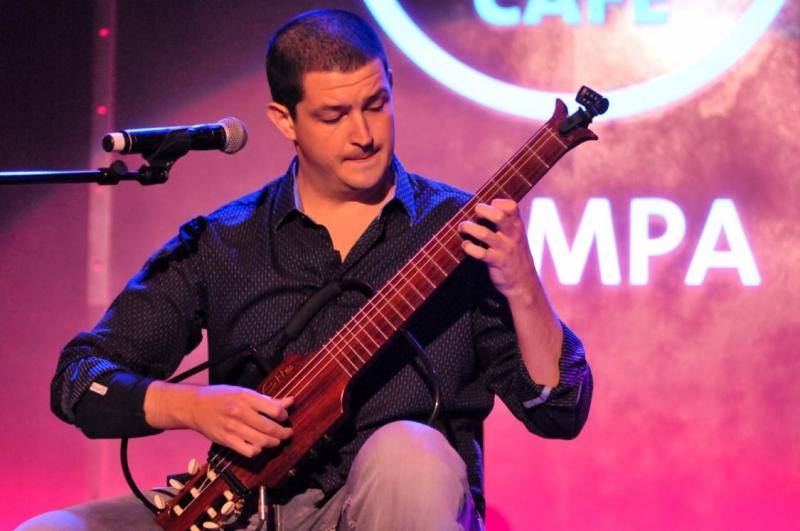 Ben started playing guitar when he was 12 and “obsessed” with Metallica and Ozzy Osbourne.  He convinced his parents to buy him a guitar and he played electric guitar for 2 years. He went to Blake High School to play in their electric guitar program but there was a new teacher that year and the program was changed to a classical guitar program. He almost transferred schools but stuck it out and has been playing classical guitar, with a twist, ever since. 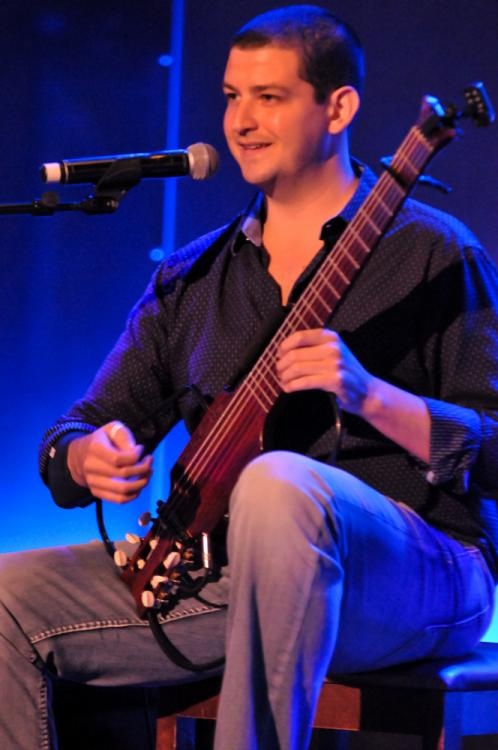 Ben plays a soloette guitar, also known as a wire frame travel guitar. His set included a mix of classical, pop, and tango covers including “Here Comes The Sun” and “Yesterday” by the Beatles, the “Game of Thrones” theme song, a Brazilian, Argentine and French tango and a incredible “Bohemian Rhapsody” by Queen to close out the set.  Ben doesn’t write songs but has released a CD titled Commemoration.  It is a selection of the music he has performed during the 9/11 memorials and is a tribute to the survivors and victims of 9/11.  Ben teaches at Polk State College and plays mostly private events. Check out Ben here. 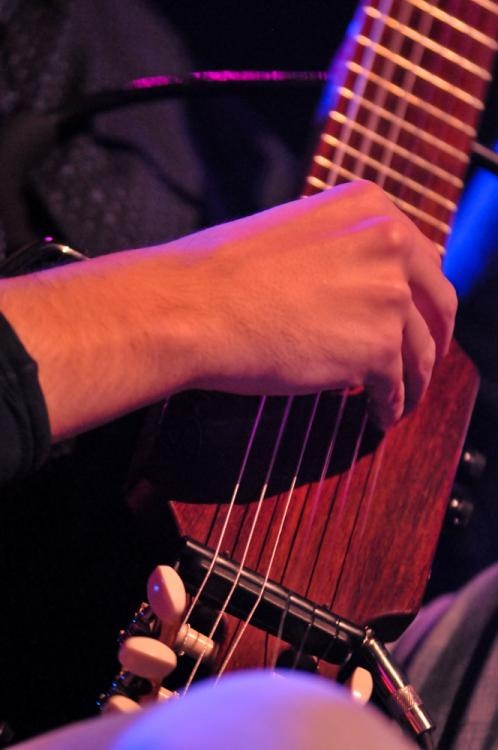 Travis Williams took the stage next for a set of all original music.  Travis is a singer-songwriter guitarist who started playing guitar at age 13.  He learned to play “Smoke on the Water” and was hooked. Singing came from growing up in the choir at church and songwriting came “naturally”.  When Travis was 21 his band, Only After 5, was signed and he toured extensively in the US and Canada for three years. Things changed when he had a child. He gave up his record deal, got a “real job” and put music on the back burner.  Fast forward 9 years and Travis is again a full time musician, playing in 3 different bands with hopes to be re-signed. 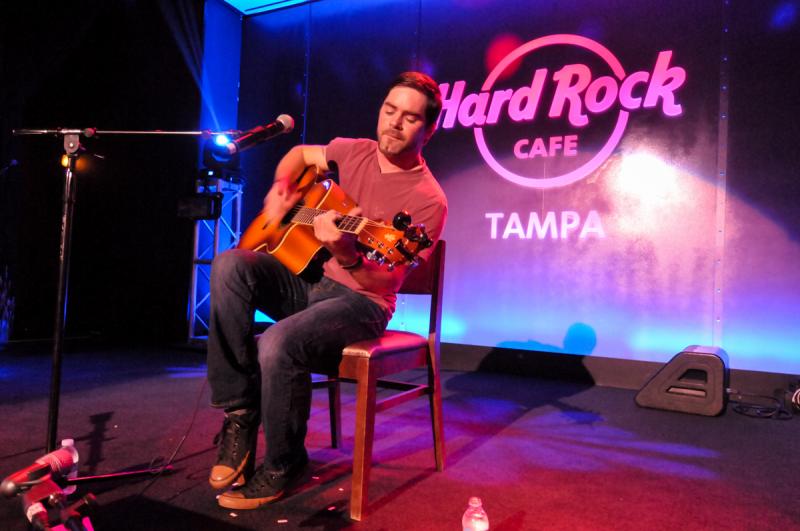 After seeing his set last night, I would say that’s pretty likely! Travis is an extremely talented, passionate musician who writes deeply emotional, upfliting songs. Originals included “Don’t Look Back”, a song about not letting anything get in the way of your dreams and “Not Giving In”, a song about doing what you love and not giving into the pressure of the world.  Travis is working on an EP with his full band that should be released at the end of the month. Until then, see Travis this Saturday at the Green Iguana in Tampa on Westshore Blvd. or at Hogan’s Beach on June 25th. You can also keep in touch with Travis here. 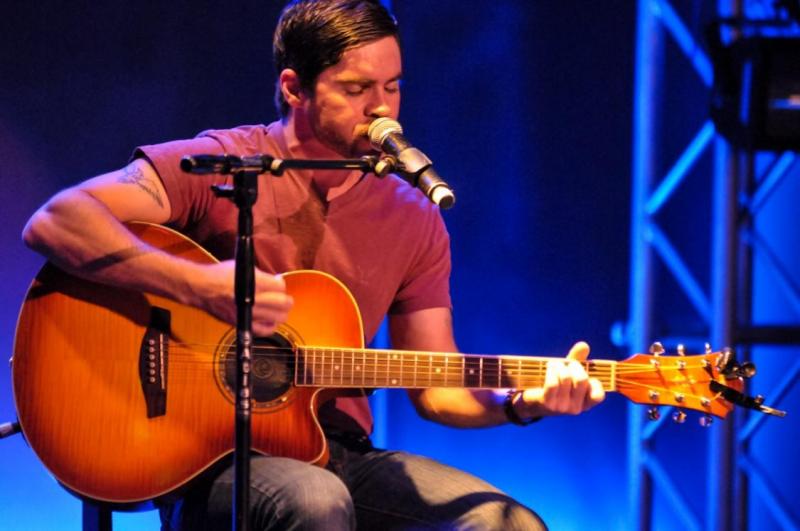 JANANI stormed the stage with a four piece band for an all original set! JANANI consists of Janani Vaidyanathan lead vocals, Nathan Hockett acoustic guitar, Erick Campos double bass, and Austin on cajon.  This version of the band has only been playing together for three months but the band was formed in 2010 and Janani has been singing since she was 7.  Janani is a third generation musician so music just came naturally to her.  She writes songs with band member Nathan and enjoys writing songs about relationships and friendships. 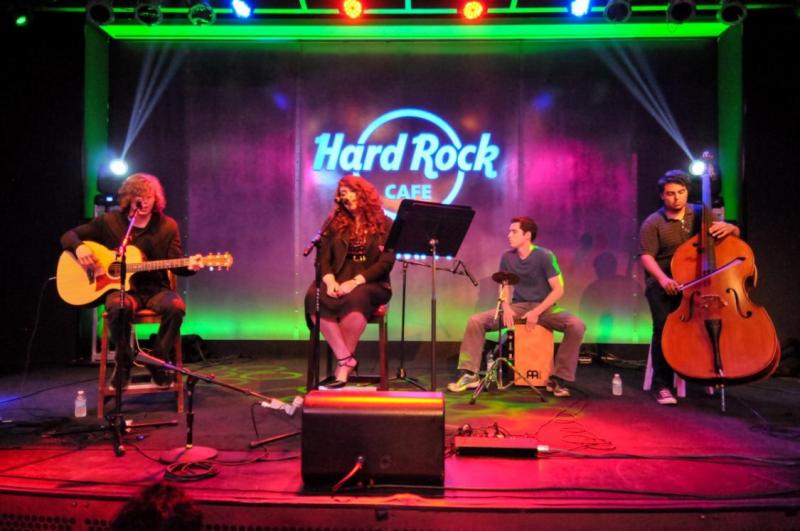 Listening to their set, it’s clear this band is very talented and Janani has some pipes!  Songs included “First to Fall” about a love/hate relationship that you don’t want to fall into again, “Run (Pick Up The Gun)” a song making fun of people who feel they always have to be right, and “Violet Hour” a song about solitude and being content with being alone. 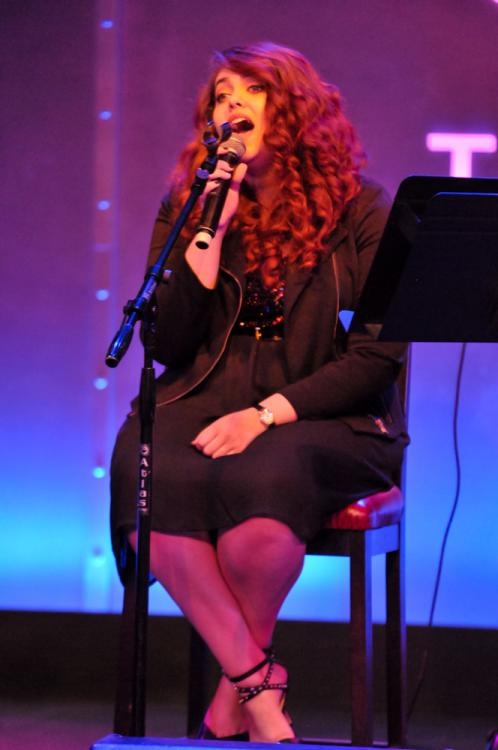 JANANI released their debut album, Hey! Mister! in 2010 and their first EP, Three Step System EP, in 2014.  They expect to release their single “Run (Pick Up The Gun)” this summer.  JANANI is currently number 1 on ReverbNation Alternative Orlando charts and collectively has over 32,000 fans over 5 different social networks. They were recently selected to perform at the Cutting Edge Music Conference in New Orleans in August.  If you can’t make it to NOLA, keep up with JANANI here. 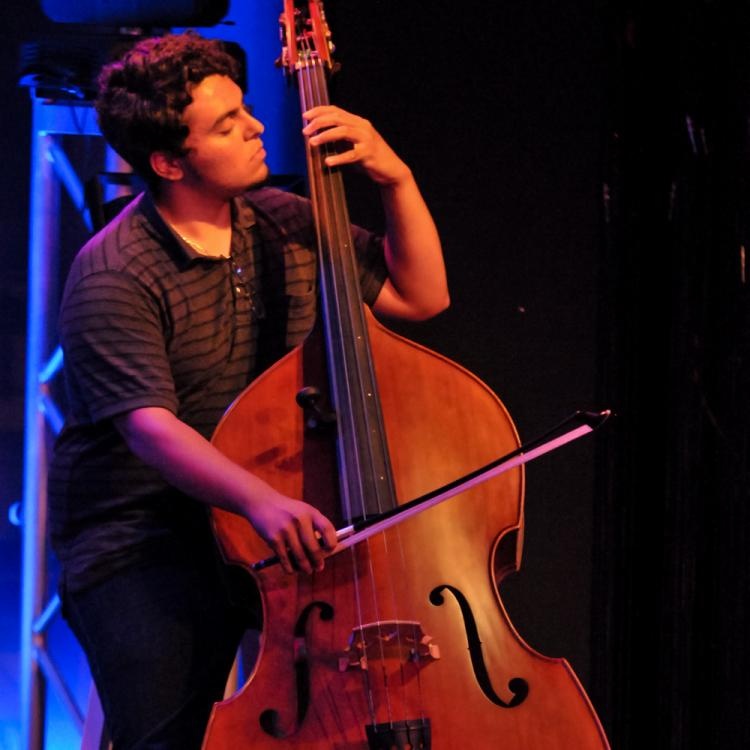 Closing out the night was masterful musician Jeremy Thomas.  Jeremy picked up music from his Dad who sang and played guitar.  He taught Jeremy to play “House of the Rising Sun” on guitar when he was 16 and he’s been hooked ever since.  While he loves playing guitar, his real passion is songwriting. He loves to “touch the human soul with melody” and help “other people realize they’re not alone”.  Jeremy has written over 150 songs in his 20 year career. 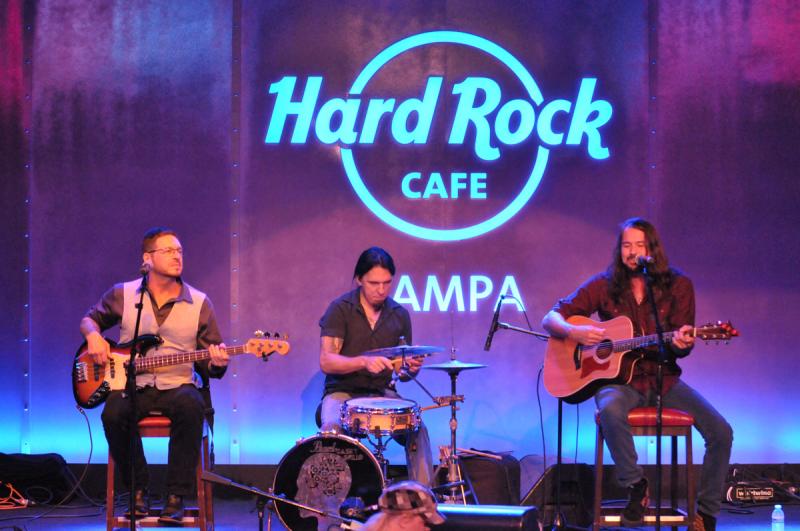 Jeremy played a powrful set of cover and original songs including “Save Tonight” by Eagle-Eye Cherry, “Barely Breathing” by Duncan Sheik and “Wonderwall” by Oasis.  Originals included “Invisible” a song about falling in love with someone via text or social media and feeling like you’re right there with them but they’re really invisible, “In Between” a song about trying to find the beauty in the space of where I am and where I want to be, and “Love and Money” about an astronaut who escapes from love and money and find happiness in life away from the American “dream” that doesn’t really exist. 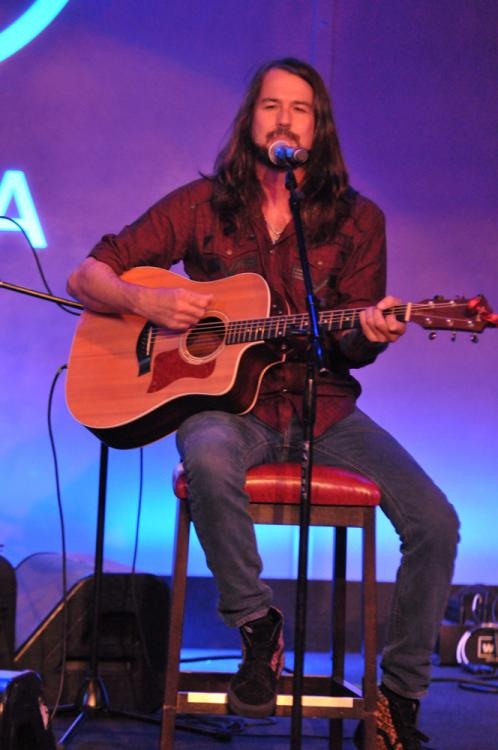 Jeremy is currently working on a 10 song CD entitled “Love and Money” which he expects to release later this year.  He has recently joined the band Blackfoot and will be playing this Saturday night at Jannus Live in St. Petersburg. If you can’t make the show, follow Jeremy here.

The Tampa Bay Acoustic Music Festival at the Hard Rock Cafe continues all weekend with a fantastic lineup of local bands. Check out the schedule here and head to the Seminole Hard Rock Hotel & Casino Tampa to hear some of the best local live acoustic music around!