The toe-tapping kicked into high gear as the Seminole Hard Rock Hotel & Casino Tampa celebrated the 25th Annual Charlie Daniels Golf Classic and Angelus Country Concert.  Each December, country music legend Charlie Daniels hosts a series of fundraising events at the casino to benefit The Angelus, a group home and activity center for severely handicapped people in the Tampa Bay community.  In honor of Charlie Daniels, the casino is also raising money this December to support The Angelus and hosted a Play For A Cause Fundraising Event at the Hard Rock Cafe Tampa on Friday, December 4th. This exciting evening featured a red carpet ceremony, Charity Slot Tournament and a benefit concert by Robert Cellucci, a local Tampa Bay area country musician.

The Angelus is a a full-time residential facility and day school program for the severely handicapped in Hudson, Florida.  Founded in 1979, they provide compassionate care for residents and students who do not have the ability to care for themselves.  The residential program provides safe, comfortable, wheelchair accessible housing while the day school program provides supportive activities, developed to maximize each person’s readiness, daily living and communication, according to the website.

To support The Angelus, the casino will be donating 100 percent of the proceeds from sales of the limited-edition The Angelus yellow sunglasses as well as proceeds from sales of the 2015 Seminole Hard Rock Girls Calendar during the month of December.  You’ll definitely want to pick up a pair or two of these stunning yellow shades, modeled by gorgeous Hard Rock Girl Krista. To further support their work, the casino hosted a Play For A Cause Fundraising event, benefitting The Angelus.  The event began with a Charity Slot Tournament where the casino raised additional money for the organization by donating fifty percent of the $10 tournament entry fee to The Angelus and 50 percent to the prize pool. Open to the public, everyone had fun playing the slots for the chance to “win big” while also supporting this worthy cause.

The Hard Rock Cafe Tampa was stompin during a performance by local musician Robert Cellucci.  A “country boy” at heart, Cellucci developed a passion for music while growing up on a farm in rural North Carolina.  As an aspiring “Musical Theater Star”, Cellucci performed in numerous Off-Broadway musicals before falling in love with the guitar when he was 16 years old.  “Music is a big part of my life, which I will never stop improving.  Writing and putting together songs has been challenging, but its the motivation to touch the hearts of people that keeps me going” said Cellucci.

Influenced by country legends Charlie Daniels, Luke Bryan, Blake Shelton and Keith Urban, Cellucci started playing shows after re-locating to Tampa two years ago.  As past of the casino’s continuing effort to support the development of local musicians in the Tampa Bay area, Cellucci was selected to headline the concert after participating in closed auditions at the Hard Rock Cafe Tampa for one of eight coveted spots on the weekend concert calendar.  Cellucci is a life-long Charlie Daniels fan and felt “privileged and honored” to donate his time in support of this great cause, said Cellucci. Cellucci wowed the crowd with a mixture of cover and original songs including “Crash My Party” by Luke Bryan, “Cop Car” by Keith Urban and one of my personal favorites, “Live Like You Were Dying” by Tim McGraw. Cellucci also performed his original song “The End Of A Rainbow”.  Celucci wrote this song after a rainy day turned into a memorable one when he and his wife saw what lies at the end of a rainbow. “We were driving and it was raining so hard we had to pull over. Suddenly the rain stopped, variations of light hit the concrete and we saw the rainbow end right in front of us. Legend says there is a “pot of gold” at the end of the rainbow but this experience made us realize the pot of gold is whoever you’re with when you come across the end of the rainbow” said Cellucci.  This song is on Cellucci’s album, The End Of A Rainbow and you can listen to it here.

The highlight of the night came when the casino announced they raised $1,770 in one evening for The Angelus! The Angelus will also receive this stunning Dean Guitar signed by the 3,400 team members that work at the casino! The fundraising continues all month long so don’t miss your chance to support The Angelus this December at the Seminole Hard Rock Hotel & Casino Tampa. 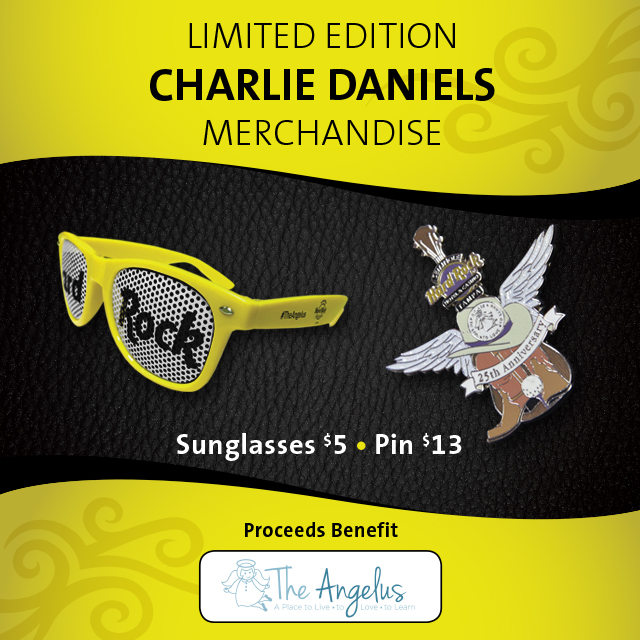