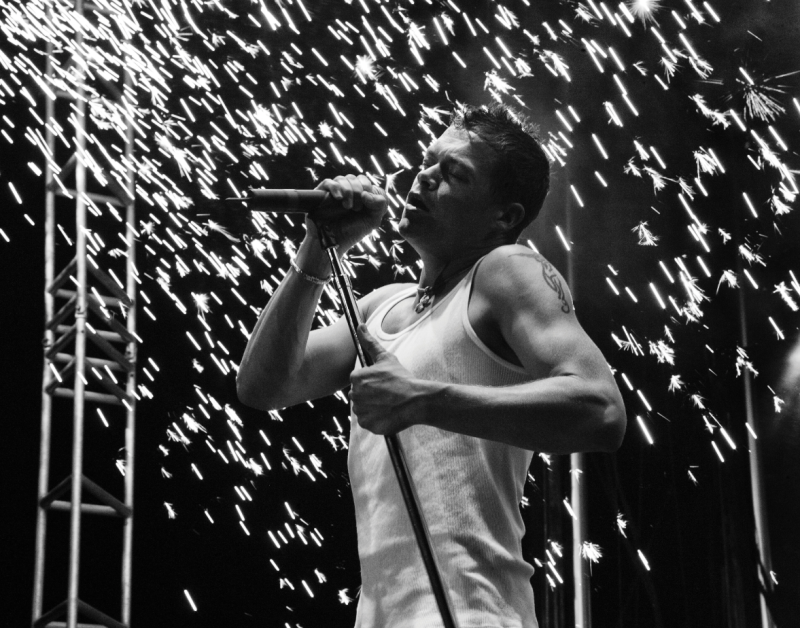 The lead singer of 3 Doors Down, Brad Arnold sat down with us to discuss his highly anticipated, sold-out concert coming up at the Hard Rock Cafe on September 5. We got the details on their upcoming album and the exclusive music that Hard Rock Tampa fans will hear.

Hi Brad, how are you?

I’m doing really great, how are you?

I’m great thanks. We heard you’ve been traveling around the country, most recently to Okinawa, Japan for AmericaFest 2014. What was that experience like playing for the troops?

It was a great experience. That was the first time that I’ve ever been to Japan and I’ve always wanted to go. We were playing on the base, but we still got to go out and see Okinawa, which was really cool. You’re in Tampa and I’m in Mississippi, but I’m not really sure we even know what humidity is because it was so humid there. One day it was 89% humidity and another day it was 92%. I came home to visit my family and they said it was humid out here and I told them it was not humid compared to Okinawa. It was cool to see the culture there though; people were very nice and respectful. There’s a lot to be learned from somebody like that. I enjoyed playing for the troops, it was one of the coolest things I’ve ever done in my life.

Will Hard Rock Tampa fans hear any exclusive music during your concert September 5?

They will. We’re in the midst of writing a record right now and so far we have three songs done for it. They’re really cool songs and we’ve been getting really good feedback for all of them. The three songs are: “I Don’t Want to Know”, “You Better Believe It” and “Pieces of Me.” “Pieces of me” is kind of a reflective song that is a little bit slower, “You Better Believe It” is rock n’ roll and “I Don’t Want to Know” has almost a Latin vibe to it. When you hear it, you’ll totally understand what I’m talking about, but it’s a cool song. It’s amazing how “I Don’t Want to Know” has been going over. It’s not an incredibly complex song or anything, but people really like it, especially girls. Desmond Child once told me, “Never write a song to a dude, you’ve got to write for a girl.” It is the truth because if a girl likes it, a dudes going to like it. When we start playing that song, half of the women in the audience start wiggling. (Laughs)

Did you know the concert is sold out? Everybody is really looking forward to it.

That’s awesome – Tampa’s always been so good to us!

Who is your all time favorite rock star and why?

Being a veteran of the road, what would you say is the biggest misconception of a rock star lifestyle?

A lot of people think that you’re always in fancy hotels and on a private jet. They think you’re eating caviar all of the time, but in reality I’m eating Subway on a bus in the middle of nowhere. It’s a lot of traveling, but I love it, I really do. It’s not as lavish as people would tend to think it is, but it’s great.

What inspires you to do what you do?

Life. Also, before I was a singer, I was a drummer. My brother got me started playing when we were little kids because I was always walking around beating on stuff and I’m still always tapping on things. I’ve always really enjoyed music. I guess what influenced me to become a singer/ songwriter was the fact that I was never great at math, but I could easily sit down and write you a paper. I used to write poems a lot and a song is really just a poem with a repetitive course. Writing songs was an out for me and I found out a lot of people felt the same way as I did. Something I always tell people is that we’re all in different lanes, but we’re all on the same road. There are many different problems in life, but they all have emotion. It’s been a blessing for me to be able to write songs and it has taught me just how much everybody is the same.

3 Doors Down has had over 18 years of success. What are your hopes for the future?

Just keep on going and see if we can do it another 18 years. We don’t really try to make any plans, but after we get off of this tour we’re going to make another record.

What are some of your favorite elements of playing in a casino?

I like playing blackjack and Wheel of Fortune. Those are my two favorites because that’s all I’m really good at. Those two treat you good too. It’s fun to play at Hard Rock because it’s always a good time and it’s really cool.

Do you enjoy gambling?

Yeah, I like it. I like playing in casinos because everything is right there and easily accessible. You don’t even have to go outside, which is great!

Are you more of a slots or table games person?

The word on the street is that you’re working on a new studio album. How is that coming along and when do you plan on releasing it?

We’re going to try and have it recorded by Christmas. We want it out by next spring though. When we get off of this tour, we’re going to work really hard and get in there to finish the songs. Like I said, we’ve got three done, but we have a lot of ideas in the works and it’s going really well. We’ve got a couple of new guys in the band too, so there’s a different flavor, which is very welcome. I want it to be fun and have some substance to it. I think people are done with songs that are so serious. I think we got that out of our system in the late 90s and 2000s. For the love of God, let’s smile!

The Seminole Hard Rock Tampa is really looking forward to having you in September and we appreciate you taking the time to chat with us. We look forward to seeing you.

My pleasure and I look forward to seeing ya’ll too! I’m excited to come to Seminole Hard Rock Hotel & Casino Tampa for a sold out show!