What do you get when you unite Tampa’s acclaimed Cigar City Brewing with the Seminole Hard Rock Hotel & Casino Tampa‘s prestigious Council Oak Steaks & Seafood for one night? An absolutely unforgettable Cigar City Brewing Dinner experience!

Council Oak Steaks & Seafood and Cigar City Brewing teamed up to create an innovative, beer-curated four-course extravaganza. Held in the Council Oak Lounge, diners were treated to a special menu from Council Oak paired with drinks from Cigar City Brewing and music from the The Roberto DeBourg Band.  Diners also received a gift bag with a special Commemorative Glass, a Cigar City t-shirt, and cigars to enjoy after the meal. 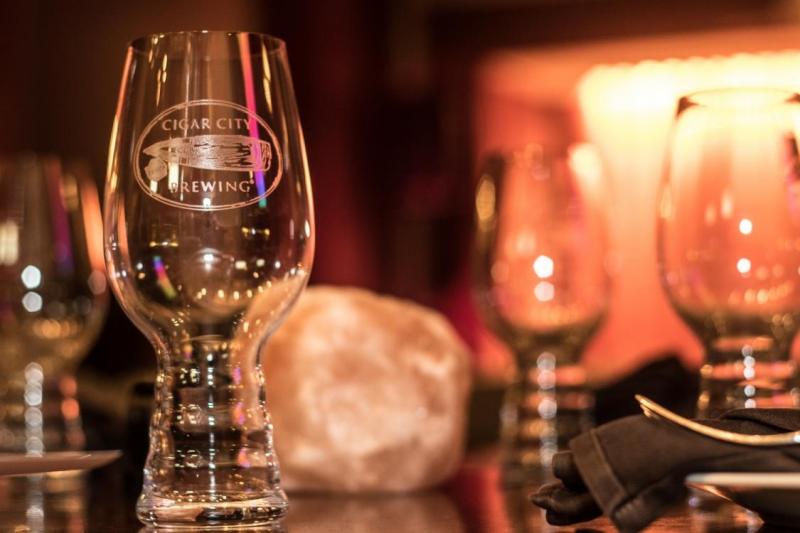 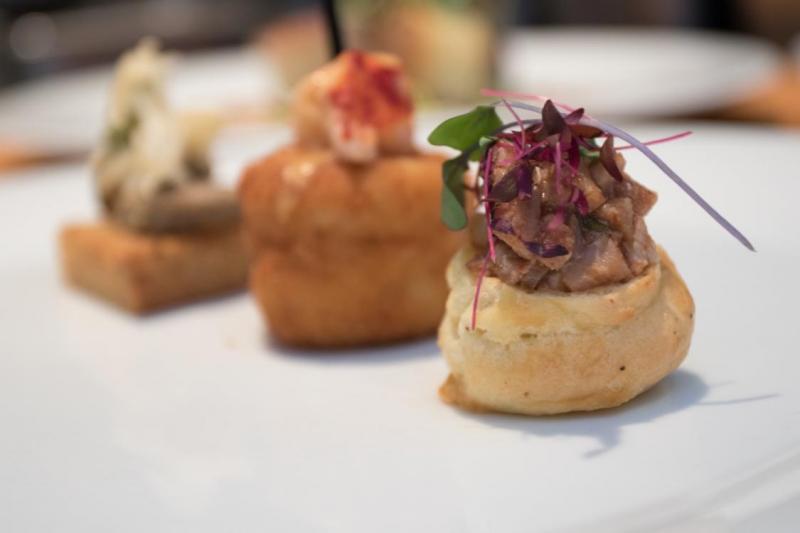 Hors d’oeuvres were paired with two unique drinks, Watermelon Cider and a Cucumber Saison.  The Watermelon Cider is a blend of cider apples and watermelon juice.  It has a light watermelon flavor with a clean, crisp semi-dry finish. It’s very refreshing and not too sweet like many ciders.  It was served in a champagne glass which is the perfect idea for a summer party in the Florida heat.

The Cucumber Saison is a summer beer with a pronounced cucumber flavor and hints of lemon and tropical fruit. It was the ideal accompaniment to our trio of Hors d’oeuvres.

The First Course was a Smoked Buffalo Tartar paired with Guava Grove beer. This was a beautiful plate consisting of Smoked Buffalo, Shallots, Capers and Roasted Guava topped with a Fried Quail Egg and a delicious Toasted Garlic Foam.  The perfectly fried quail egg was a nice addition to the tartar and the toasted garlic foam was light and airy without overpowering the dish. 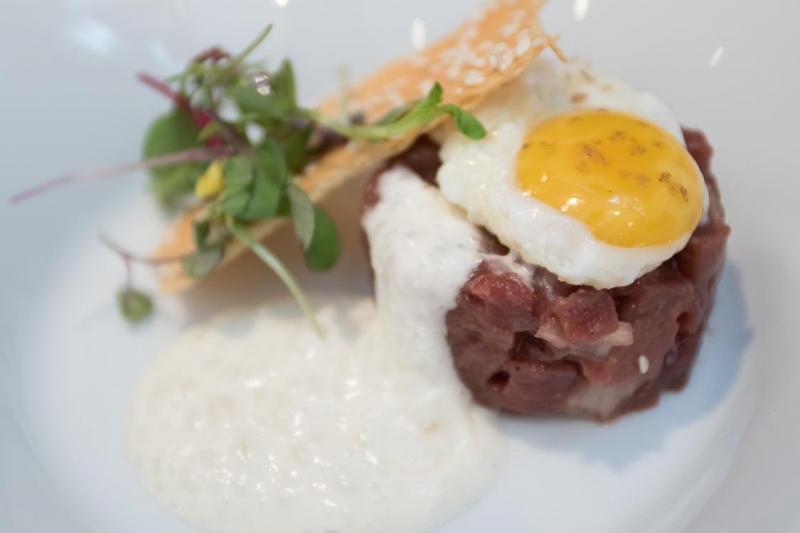 The highlight of this course for me was the Guava Grove beer.  I love guava but I never expected to find it in a beer!  Leave it to Cigar City to create this outstanding beer in tribute to Tampa’s nickname, the Big Guava.  Guava Grove is an American Sour Guava Ale that experiences three fermentations.  The second fermentation adds a French strain of Saison yeast and the third fermentation adds a pink guava puree.  Slightly tart with a dry finish, this beer paired perfectly with the roasted guava in the dish and the acidity of the beer helped balance the “tartness” of the buffalo tartar. 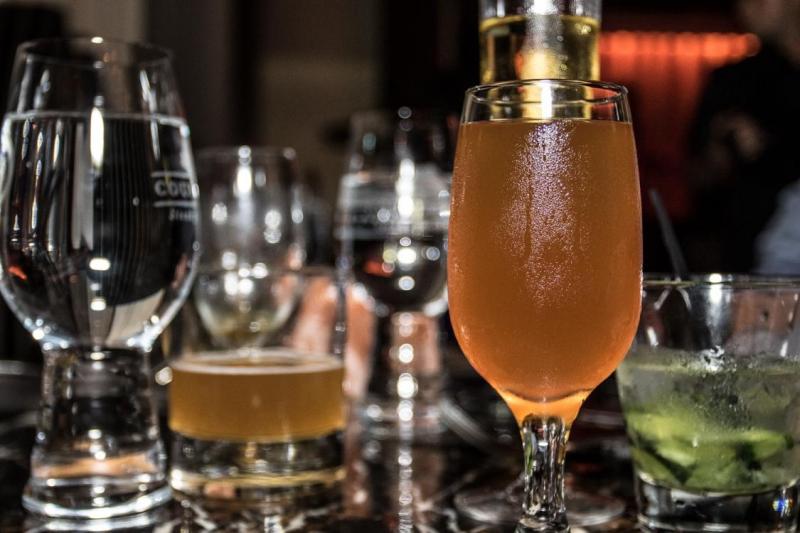 The Second Course was a Jai Alai Infused, Beer Battered Soft Shell Crab served on a puddle of Old Bay Dijonaise with Housemade Picked Baby Carrot paired with a White Oak Jai Alai IPA. I absolutely love soft shell crab and this one was fried perfectly with hints of the Jai Alai beer mixed with the delectable sauce. 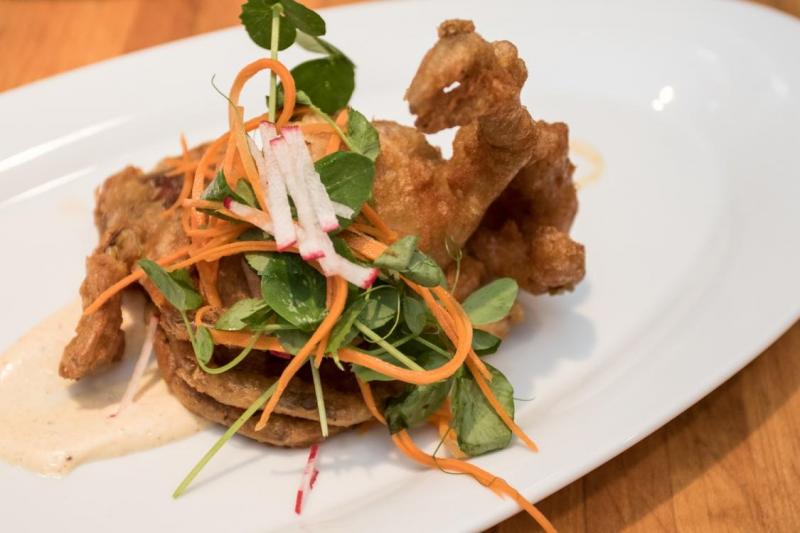 The White Oak Jai Alai IPA, one of Cigar City founder Joey Redner’s favorites, pours copper in color with smoothing notes of vanilla and hints of dill. It has a dry finish and is perfect with seafood due to the light tannin notes from the white oak aging process. 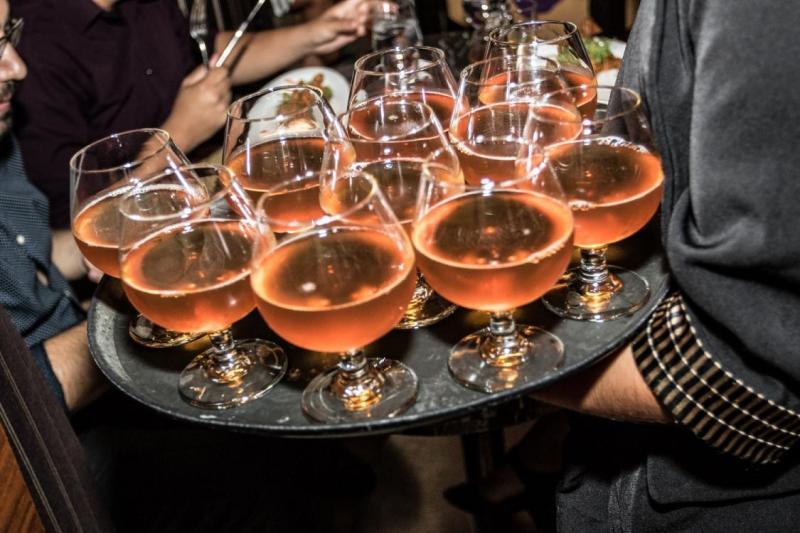 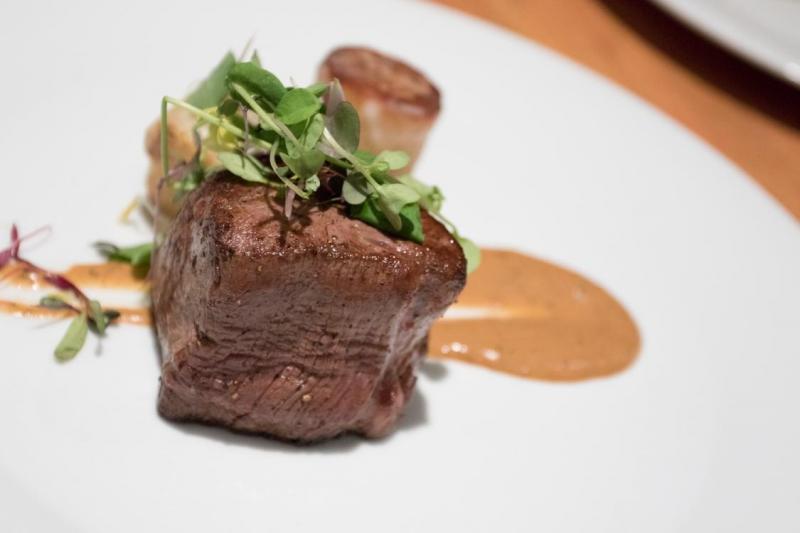 The surprise of this course was the Chicory Chocolate Brown Ale.  It has the spicy smell of chicory and cinnamon mixed with notes of caramel, toffee and chocolate. It’s slightly fermented and smelled almost too good to drink!  Almost.  I gave in and was greeted with the moderately sweet taste of roast coffee, molasses and chocolate with a lengthy, robust finish. It was the perfect accompaniment to the hearty steak and the rich Remy Martin V.S.O.P. 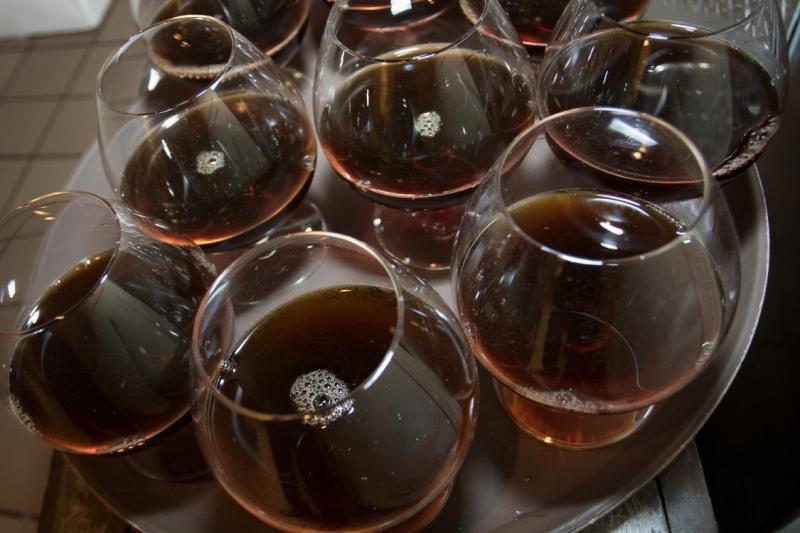 Our final course was the dessert course, Churro Doughnuts with a Horchata-Infused Pastry Cream and Chocolate Sauce paired with a Horchata Ale. Horchata is a traditional Mexican beverage made with rice, flavored with lime and cinnamon and sweetened with sugar.  I happen to love horchata so I was especially excited for this course.

The delightful Churro Doughnuts were served in an elegant sugar-spun basket with an exquisite side of horchata-infused pastry cream for dipping as well as some spicy caramel coated popcorn and a drizzle of chocolate and caramel sauce.  The Churro Doughnuts were perfectly crisp on the outside and soft and chewy on the inside. The popcorn was a nice surprise and the horchata-infused pastry cream was truly exceptional. 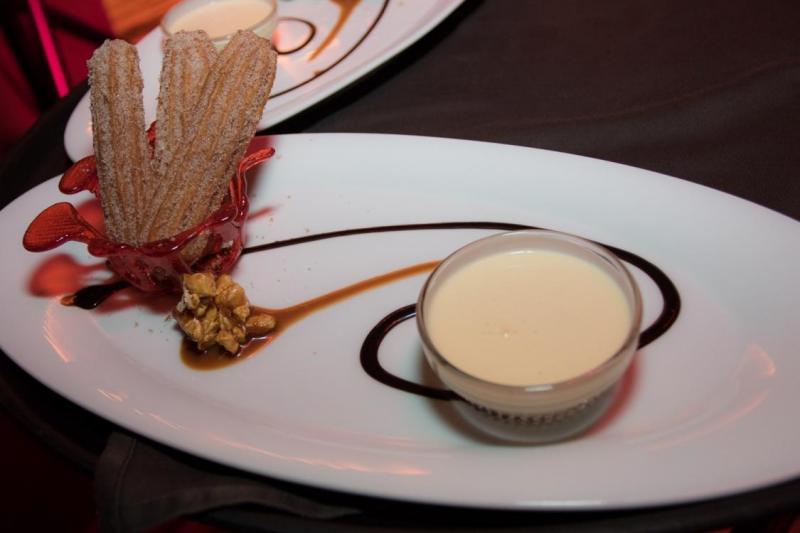 The Churro Doughnuts were served with a Horchata Ale. This beer is distinctive because it’s made using rice and lactose, a non-fermentable milk sugar that adds body and sweetness.  Served in a tall frothy glass with waves of cinnamon and vanilla, this was another beer that smelled almost too good to drink!  But drink I did and was greeted with a smooth and creamy sweetness, filled with hints of cinnamon and vanilla, similar to a traditional Mexican horchata. It
paired perfectly with the Churro Doughnuts. 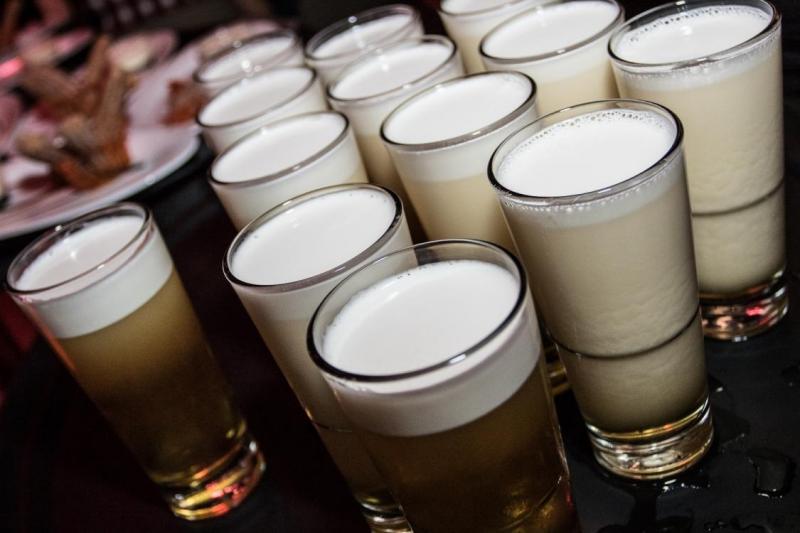 Unfortunately, this spectacular gastronmic event had to come to an end. Guests lingered over the last of their Horchata Ales while enjoying cigars from Craftman’s Bench.  I’ll definitely be making a trip to Cigar City Brewing to pick up some of the unique beers we sampled as well as making my reservation for next month’s Council Oak dinner!