Kicking off the night was Christopher Sjokvist.  Christopher is a veteran in the Tampa Bay music community and has played “everywhere” over the past 30 years.  He started playing guitar when he was 19. He borrowed a friends’ guitar at a party and by the end of the night could play “More than a Feeling” by Boston. He bought a cheap guitar at a pawn shop, played until his fingers bled and has been involved in music ever since. 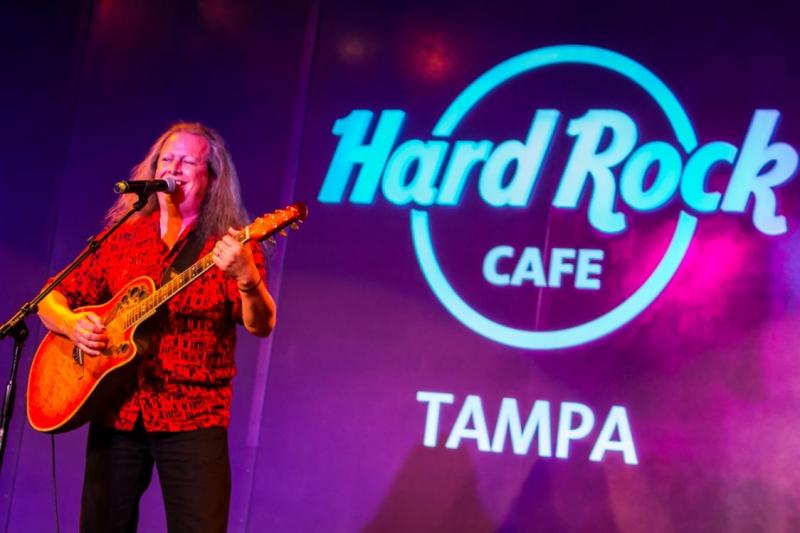 Christopher plays bass, keys, saxophone and clarinet as well as guitar and also operates a sound and light production company. As he says, “I love every aspect of music from ideas, experimentation (I used a cat food bowl and a fork for percussion once), recording, production, and especially playing live for an audience.” 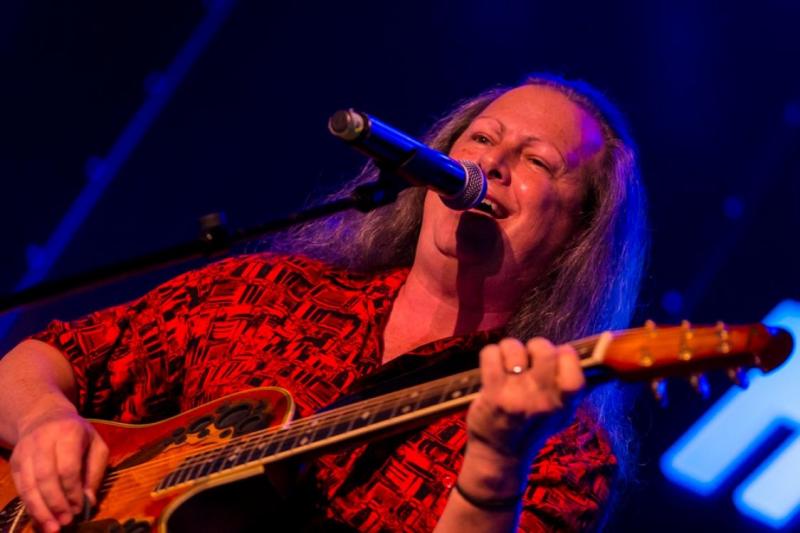 Christopher played a set of mostly original music including “Long Way Home” a song about feeling disconnected from where you grew up, “Bridges” a song about building bridges with your hands (Christopher is also a Licensed Massage Therapist) and “Hold On” a powerful song about never really knowing what someone elses’ struggles may be until you have “walked in their shoes”.  Covers included “Old Apartment” by the Barenaked Ladies and “Going to California” by Led Zepplin. 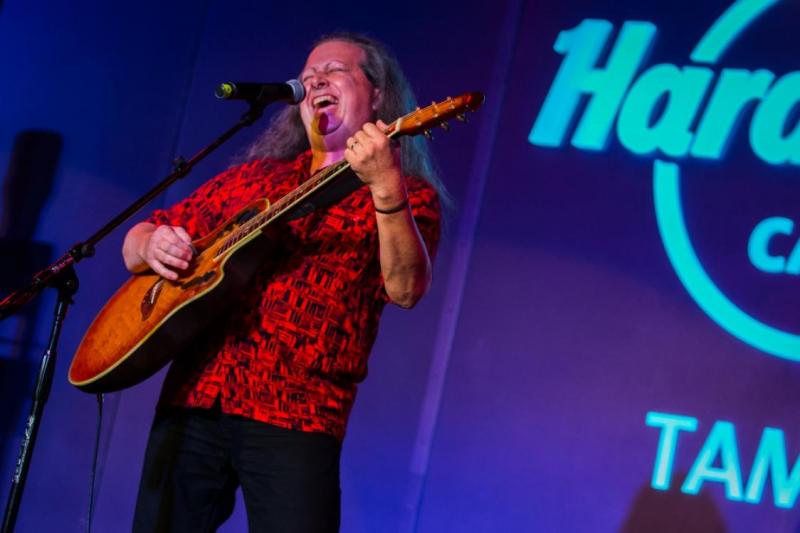 Christopher doesn’t have any albums but has a rejection letter from Mercury Records proudly framed in his studio because there are “lessons in rejection”. So true! Christopher is an extremely talented musician and surely a man to be looked up to. Keep up with Christopher here.

Next up was Nick Picardi.  Nick started playing guitar when he was 10.  His Dad was a bass player but Nick couldn’t play bass because the strings were too big for his tiny fingers so his Dad taught him to play guitar instead.  He started writing gospel songs when he was 14 and singing at 18.  Out of all three, Nick enjoys singing the most. 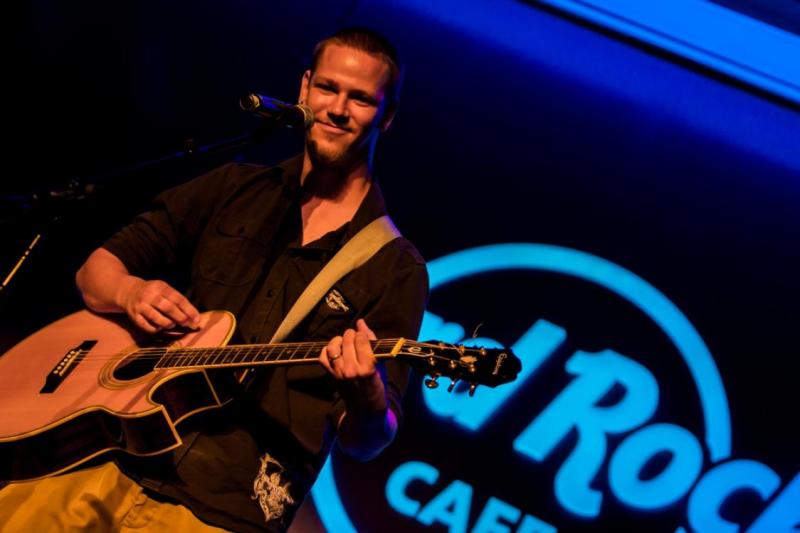 Nick played a set of mostly original music including “Forever Friend” a song he wrote for his wife about their relationship and family, she’s his “forever friend”, “The Good Days” about looking back on the “good days” of childhood and not having to worry about the tough stuff in life and “Live Forever” the story of a family member who grew up in the depression and served in World War Two. Covers included “All Summer Long” and “Amen” by Kidd Rock, “Colorful” by The Verve Pipe and “Knocking on Heaven’s Door” by Bob Dylan. 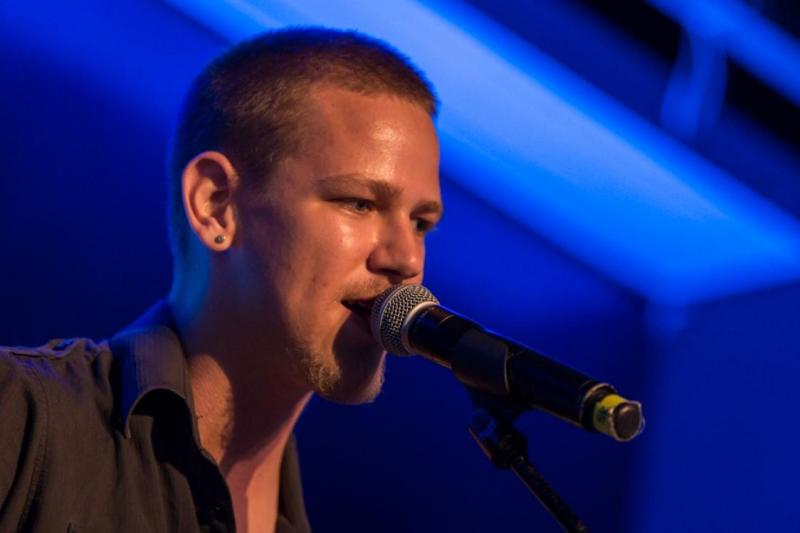 Nick is working on an album but doesn’t have a release date yet. See him every Thursday night at Sneaky’s Sports Bar and Grill in Largo or knock on his door here.

Sic Transit took the stage next for a bluesy, rocky, countrified jam!  Jonny Shaw and John Champion have been friends and musical collaborators for years and recently formed this duo after playing together in the band 5 Pound Trigger.  Johnny comes from a family of singers and started singing “in his crib”.  He grew up singing in church, started playing guitar at 13 and played in a punk band in high school. He got serious about music again when he was 23 and played in a praise and worship band for 6 years. Since then, he’s played in several bands and also plays solo. 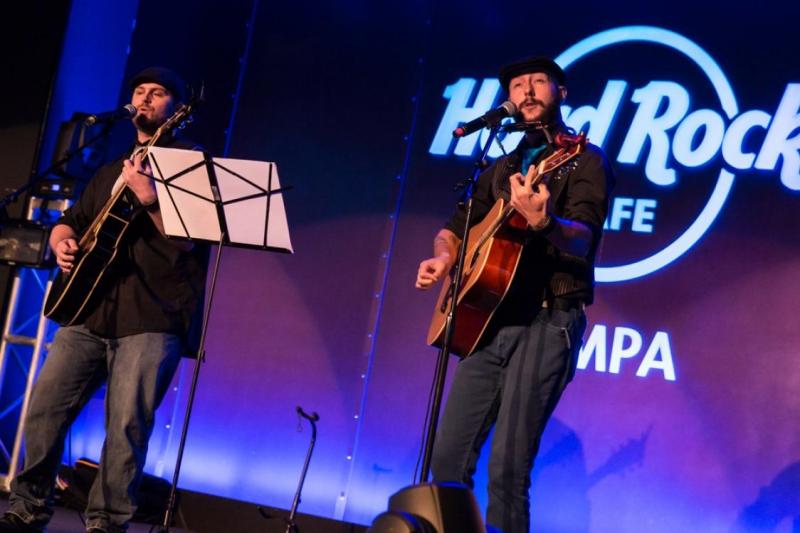 John got started in music to help repair nerve damage in his hand. He was studying abroad in Hungary and couldn’t get the physical therapy he needed so he bought a guitar instead! He used it to exercise his hand and fingers and learned to play on the side. He left his guitar in Hungary but bought a new one when he returned to the US and began playing again. He started writing songs, going to open mic nights and eventually joined 5 Pound Trigger. 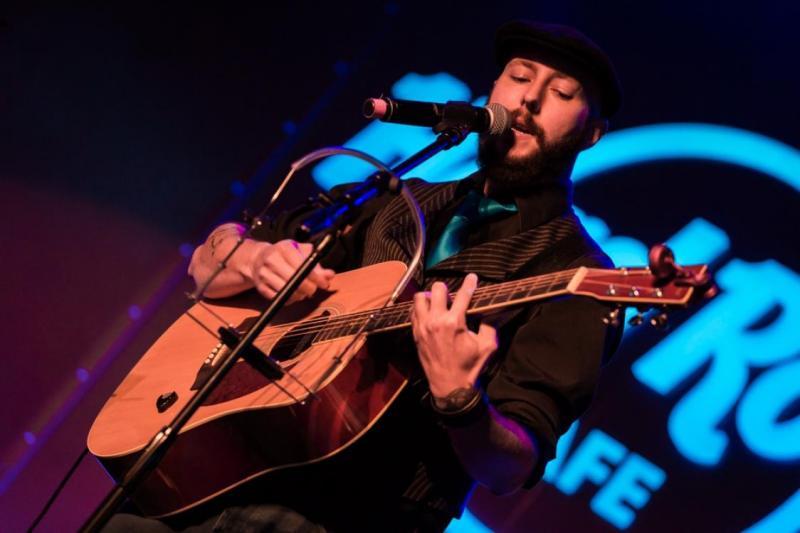 Since Jonny and John are both songwriters, they played an all original set including “Voice of Reason” about not dealing with people who are their own worst enemies and won’t listen to the “voice of reason”, “Bittersweet” a song written from the perspective of a cookie for a ex-girlfriend who’s a baker, eventually the cookie will get eaten, it’s a song full of puns and “Oh Me Oh My” reminding people to be happy, look at the bright side of life and not feel sorry for themselves. 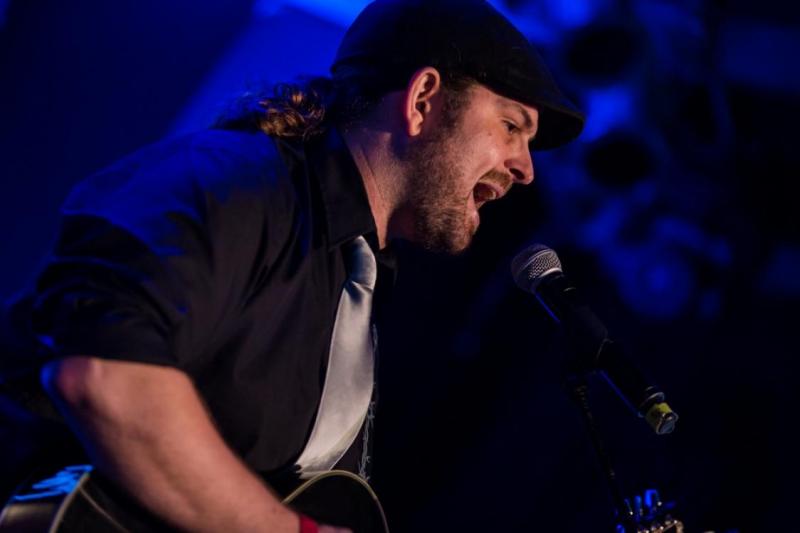 Sic Transit is a brand new project focused on jamming, writing, playing and expanding their lineup. They’re working on booking more shows and will see what happens with regards to releasing an album. Get on board with Sic Transit here.

Rockin’ the stage next were The Hanging Chads.  The “Chads” are composed of Darienne Shayne on vocals, Lars Tatum on guitar and backing vocals, Harrison Kepley on bass and the newest member Chase, who played his first show with the band last night, on cajon.  All of the Chads attended the Patel Conservatory Rock School, a local music education program.  Even though all of the band members are teenagers, they’ve been playing together for 3 years! 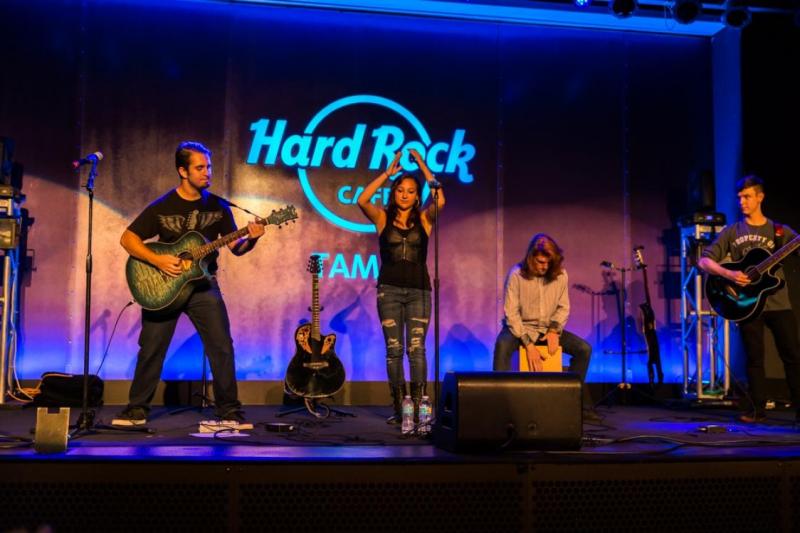 The Chads played a set of original and cover songs including “Escape” about a friend who got his heart broken, “Rap Show” about the experience of being at a rap show, “Watch Me Bleed” about not letting people get you down and “Oneiro” about the fear of nightmares.  Covers included “Oh! Darling” by the Beatles, “Heart-Shaped Box” by Nirvana and “Would You Still Be There” by Of Mice & Men. 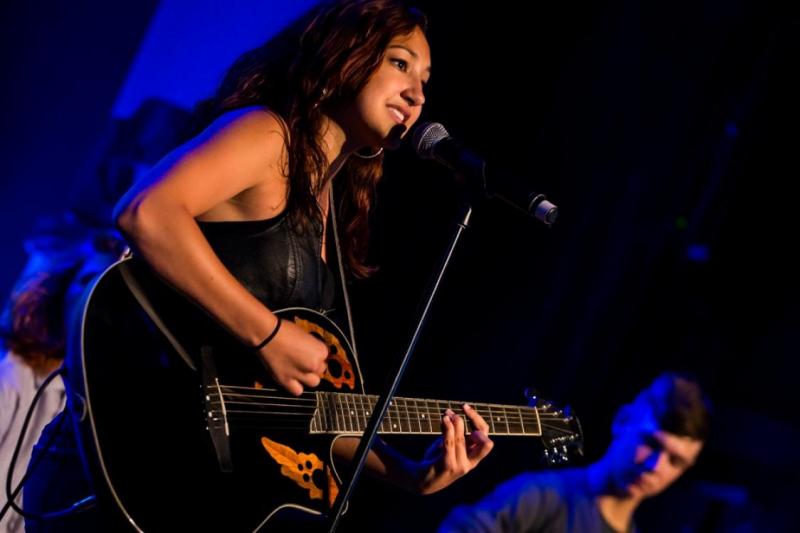 The Chads have released 2 EP’s and plan to release a third EP this summer. See the Hanging Chads at the Market on 7th in Ybor City on August 21st or hang with them here. 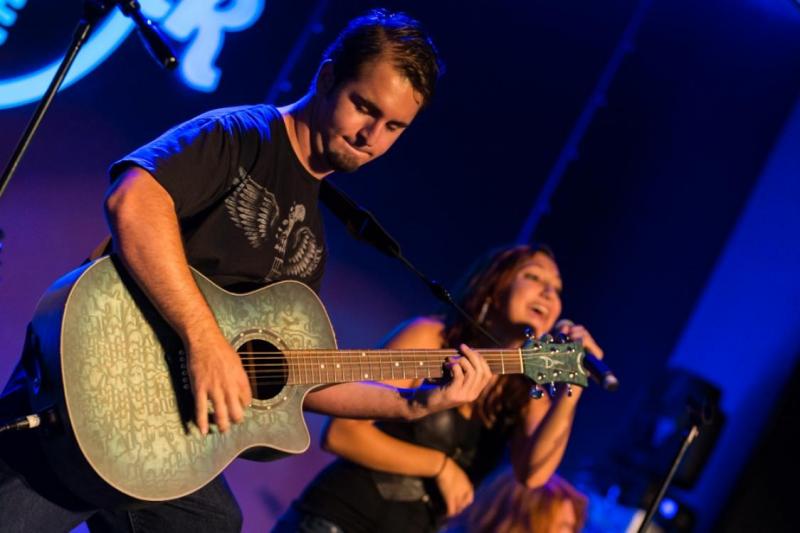 C’Nergy closed out the night with a set full of energy! Composed of Stacy and Andrew on vocals, Caleb on Sax, Marcus on Cajon, Lisandro on Keyboard, and Rafael on Bass and Guitar, C’Nergy has been performing together for the past 5 years. 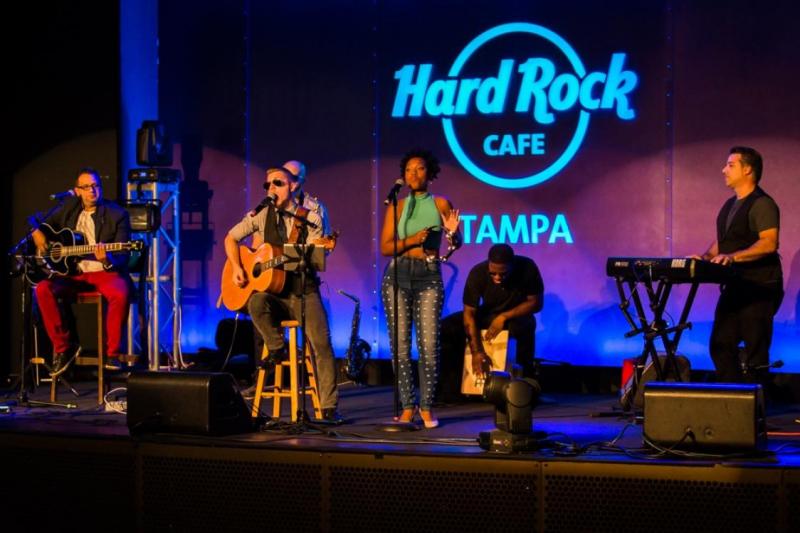 This group of musicians has “C’Nergy” because they are all deeply passionate about music and bring their own ideas together to create a very powerful musical team that pushes each other at every show to bring out the best in them. 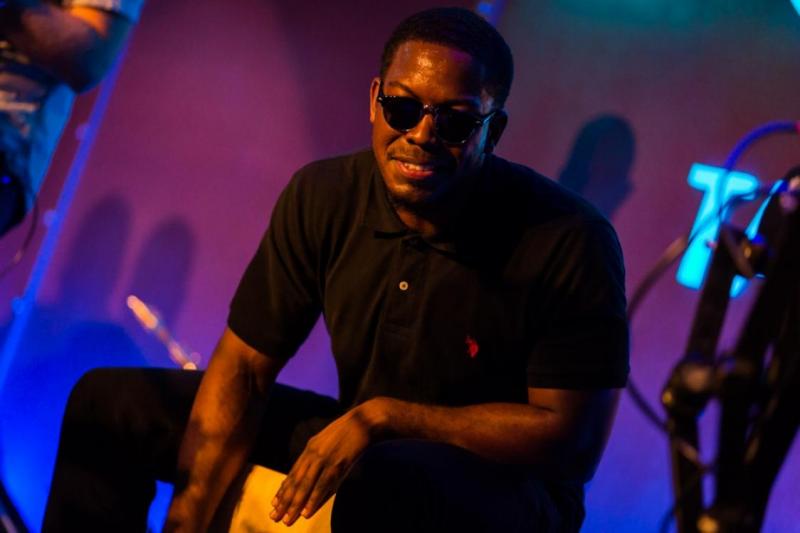 C’Nergy performed a mix of R&B, Pop, 80’s and Rock tunes including “Vertigo” by U2, “Shake It Off” by Taylor Swift, “Billy Jean” by Michael Jackson, “Come  Together” by the Beatles, “One More Night” by Maroon 5 and “Livin’ on a Prayer” by Bon Jovi.  Get C”nergized here. 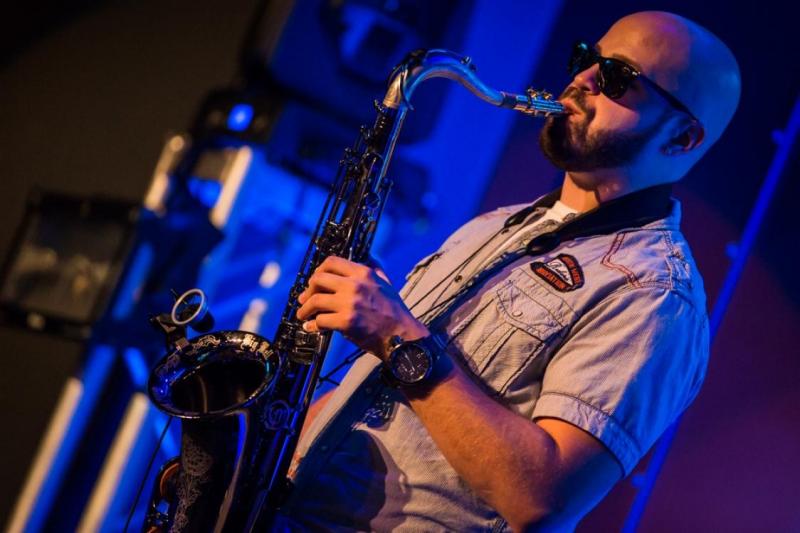 Tonight is the final night of The Tampa Bay Acoustic Music Festival!  Don’t miss your chance to take part in the festival and see Joey Mazzant, Drew Richter, Adam Westfall, The Ben Carter Band, and King County starting at 5pm in the Hard Rock Cafe.